Is your pricing strategy robust enough to help you survive today's business reality?

Across the world, macro and micro-economic factors appear once again to be driving the global economy towards recession. In the UK, Brexit has already reportedly cost the country £66 billion since 2016, according to the credit ratings agency, Standard and Poor.

A study by the National Institute of Economic and Social Research (NIESR) has found that if or when the UK leaves the EU, GDP will be 3.5% lower after 10 years than remaining in the EU. Estimates show that the country will lose £70bn in economic value as a result of Brexit.

In the U.S., China, Japan and South East Asia, growth is slowing. Not cooling down as rapidly as Europe’s economy, but partly thanks to the trade war between China and America, populist and isolationist political forces are having a serious economic impact.

Japan’s already struggling economy has ground to a halt. The IMF predicts tariffs would shrink China’s economy 1.6%, and the U.S. would shrink 0.9%. As a result of the trade war as it currently stands, the IMF reduced global economic forecasts 0.2%.

WHAT DOES THIS MEAN FOR BUSINESS PRICING?

We don’t have to look too far back for an example of what happens when a recession hits. Recessions happen, economies grow and contract, boom and bust. Although if one does hit, historians will probably look at it as one of the most avoidable and in many ways, politically at least, self-inflicted recessions to ever happen.

When the last global economic crisis shook the world economy, manufacturing and wholesale prices fell as much as 8%. It took 2 years for them to recover. Business leaders, salespeople and branch managers took a largely similar view: Cut prices, retain customers, do everything we can to retain market share and profitability.

During a recession, discounting is fast and furious. Prices crumble. In a B2B operating environment, people panic. Everyone panics. No one wants to lose their job, and in revenue-orientated roles, managers are desperate to hit sales quotas and continue to maximise the use of assets even when demand understandably softens.

However, this is a shortsighted approach. Cutting prices too easily erodes profitability and strategic positions. Nor does it guarantee market share is going to hold steady. It’s better to align pricing around the needs of the customers, and therefore ensure they are value-driven, not indiscriminately cut from a place of fear.

One of many examples of how fear-driven pricing can have a devastating effect on profits is the trucking company, Freightliner. Before the 2001 recession — much smaller than the global recession in 2007-08 — Freightliner had an operating profit of $900 million. Soon as the recession hit, they aggressively discounted and implemented buyback guarantees, in the hope of retaining market share.

Ultimately, the strategy failed, resulting in a $1.2 billion loss in 2001. Competitors, Paccar and Navistar maintained a more disciplined approach to pricing, and although both lost market share, neither suffered the kinds of losses Freightliner experienced.

In the automotive industry, this is often one of the first that gets affected by a recession. People put off changing cars. With changing consumer habits, a percentage of those who would normally buy a new one are waiting until cleaner (hybrid or electric) vehicles are more affordable, giving them another reason to wait. Earlier in 2019, the Society of Motor Manufacturers and Traders noted another consecutive falling month of car registrations, down 4.1%, which is the lowest it’s been since July since 2012. Another recessionary sign, and one that is going to have a downward pressure on the supply chain. 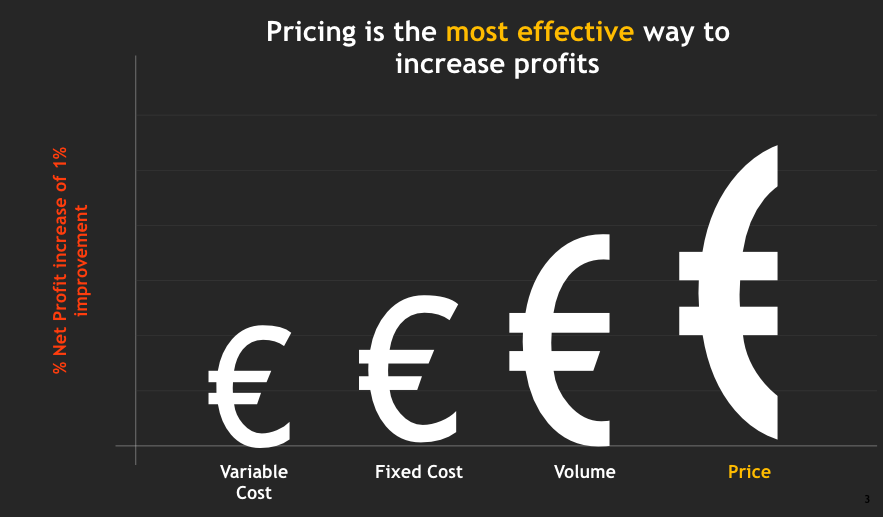 Assuming you want to avoid losing market share and profits, let’s look at what can be done to protect pricing policies from fear-based decision making.

HOW TO RECESSION PROOF PRICING?

Firstly, it would help front-line managers and salespeople to remember that customers aren’t all the same. Some are going to be more price sensitive than others, especially in a recession. But when the economy is healthy, discount banding and other approaches to pricing erode profits unnecessarily.

During a recession, treating every customer the same and applying discounts needlessly amplifies the weaknesses of traditional approaches to pricing.

Whereas, if you take a value-based approach, profitability can be safeguarded. Margins don’t need to be eroded for no gain. Even if demand reduces, with a smart approach to pricing, profits can be maintained instead of taking a hit in the next recession.

Customer-driven pricing is whereby an AI-powered algorithm tells branch managers and salespeople what customers are really willing and happy to pay, instead of relying on gut instinct, making it up on the spot, or banding discounts.

Instead of cutting prices during a recession, an AI-powered pricing solution, such as Bubo.AI can more accurately calculate what customers are really happy to pay. As we have seen, with Bubo.AI in action, clients can increase profits 19% in 9 weeks.

HOW DOES CUSTOMER-DRIVEN PRICING WORK?

Due the complexity and diversity in data and inputs collected from customers and products, advanced data analytics methods are required to ensure the model can produce the most accurate pricing recommendation.

The pricing recommendation model is selected from several thousands of combinations, if not millions, of inputs, and generated by using machine learning algorithms trained on historical data. As each customer or group of customers demonstrate different behavior according to different clusters of products, this model should be personalized via identifying both client and product-specific set(s) of inputs. Below: the Bubo.AI pricing model in action.

In order to further enhance its representation, we have also developed Behavioural Customer Network Analysis (BCNA) Framework. BCNA integrates the model with the graph theory to be able to extract insights from the data to enable informed and insightful decision making, illustrating the complex relationship between the customers and products in question.

If you are worried about the potential impact of the next recession, then you aren’t alone. Business leaders everywhere have been facing up to the impact of slower growth, macro-economic challenges, Brexit and trade wars. Now is the time to get prepared. Now is the time to put solutions in place to prevent profit erosion and the consequences of a recession on your business.

NextBubo.AI selected to present at the appliedAI ecosystem meetup in Munich

© 2021 bubo.ai ® and our owl logo are registered trademark in the UK and other countries.